Help Yourself Campaign @ the UNT Libraries

This initiative strives to connect UNT students with library resources on topics that may be difficult and stressful for individuals to learn about or discuss openly due to contextual factors in their lives. 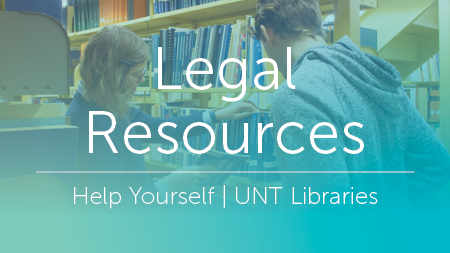 Many types of cases are handled through this office, such as the following:

This list represents a sampling of the legal services available. If students require help that Student Legal Services cannot provide, they refer them to the State Bar referral network.

Please note: Open Legal Clinic hours can sometimes change with little notice. They recommend calling the office on the day that you plan to stop by for the clinic if you are traveling a far distance.

If you need immediate assistance, they suggest contacting the Lawyer Referral Information Service for the State Bar of Texas. Through this service, you can receive a 30-minute consultation for just $20.00. If you and the attorney agree to keep working after the first 30 minutes, their rates will apply. You can reach this service by calling 800.252.9690 or you can get a referral online by visiting www.texasbar.com/LRIS.

Forms to Start With

Below are links to fillable self-help packets created by UNT Student Legal Services to empower you in resolving certain legal situations. Each packet has instructions and forms that can be filled out in Adobe PDF format, then printed and filed with the court or the appropriate agencies. While these forms are meant to aid you in resolving your own issue, they encourage you to make an appointment with the attorney in our office before proceeding.

This web page has been prepared for use by University of North Texas students only. These downloadable forms and explanations have been provided as a convenience for students and do not constitute legal advice. Before using these sample letters or forms, it is highly recommended that you visit Student Legal Services (The Union, Room 411) for more complete information contained in their free pamphlets. In addition, students with legal dilemmas are encouraged to schedule an appointment with our licensed Texas attorney who can provide appropriate legal advice.

For more information about the services available through the Legal Services, visit their website: https://studentaffairs.unt.edu/student-legal-services.
The information on this page is taken directly from their site (2020).

Wills: It's Never Too Early

Wills are documents that many college students and young professionals don't think about. It's never too early to create one. There are a few different types of these documents to consider. The following information is from Gale LegalForms.

A Will is a legal document by which a person, the testator, expresses their wishes as to how their property is to be distributed at death, and names one or more persons, the executor, to manage the estate until its final distribution.

WHO CAN MAKE A WILL?

HOW IS A WILL SIGNED PROPERLY?

Many of the wills also contain Self-Proving Affidavits which allow for easier probate. In such cases, a Notary Public is also necessary to notarize the will and the make and witnesses must be in the presence of the notary.

DO I FILE THE WILL?

State laws do not require that the will be filed and most do not have a procedure for filing Wills prior to death. In those states that do allow a Will to be filed prior to death, most are filed with the probate clerk or recorder of documents.

WHAT PROPERTY PASSES BY WILL?

All your property Will pass by your will except property which is to vest in others by other instruments. Examples are:

WHAT DO I NEED TO KNOW TO COMPLETE A WILL?

As traditional distinctions between “paper” and “electronic” documents continue to be eroded by developing technology, it will almost certainly be necessary to give formal recognition to electronic wills. In the United States, a few states have omitted the wills exception from state analogs to Electronic Signatures in Global and National Commerce Act (ESIGN), adopted in 2000, and Nevada has expressly provided for electronic wills.

In some cases, a person will enter into an agreement to provide for someone in their will, in exchange for something, such as the services of a caretaker. Such contracts should be in writing and meet all the elements of a contract to be enforceable. For example, a promise to make a will, where no consideration is shown, will not be enforced.

The following is an example of a Connecticut statute dealing with making a will:

A Living Will is a document that allows a person to explain in writing which medical treatment he or she does or does not want during a terminal illness. A terminal illness is a fatal illness that leads ultimately to death. A Living Will takes effect only when the patient is incapacitated and can no longer express his or her wishes. The will states which medical treatments may be used and which may not be used to die naturally and without the patient’s life being artificially prolonged by various medical procedures. Although the term Living Will may indicate that it is a Will, in reality, it is more similar to a Power of Attorney than a Will. Therefore, don't be confused by the title of the document. The purpose of a living will is to allow you to make decisions about life support and direct others to implement your desires in that regard.

Living Wills are needed because advances in medicine allow doctors to prolong and sustain life although the person will not recover from a persistent vegetative state. Some people would not desire to remain in that state while others would. Extending life when death is imminent to some people is only extending the suffering and prolonging of the dying process. The Living Will allows you to make the decision of whether life-prolonging medical or surgical procedures are to be continued, withheld, or withdrawn, as well as when artificial feeding and fluids are to be used or withheld. It allows you to express your wishes prior to being incapacitated. Your physicians or health care providers are directed by the Living Will to follow your instructions. You may revoke the Living Will prior to becoming incapacitated.

Laws governing living wills vary by State. Some States require two witnesses to witness your signature or that the form be signed in the presence of a Notary public, or both. If the will provides for the appointment of an agent, the agent appointed should not also be a witness to your signature. The agent appointed to carry out your wishes is sometimes called a Health Care Representative.

The Living Will generally becomes operative when it is provided to your physician or health care provider AND you are incapable of making health care decisions for yourself, such as where you are permanently unconscious or terminally ill and unable to communicate.

An advance care directive is a document that specifies the care a person wishes to receive in case that they are unable to communicate their wishes, such as being in a coma. To be enforceable, the person making the directive must be of sound mind, meaning that they are still able to think rationally and communicate their wishes in a clear manner. The document must be signed and notarized according to the laws in your state. Laws governing advance care directives vary by state, so local laws should be consulted for specific requirements in your area.

View Texas Legal Forms Library to select the right document for you.

Highlights in the Collection: Legal Resources