In response to the coronavirus pandemic, the Eagle Commons Library (ECL) remains closed to the public until further notice. Members of the UNT community may request circulating items from the ECL through their Illiad accounts. Items on reserve are not available for checkout, and their records will not display in a catalog search. If you have any questions concerning access to materials, please Ask Us!

In 1918, the Bureau of Cartoons was established by the Committee on Public Information as a method for recruiting the nation’s cartoonists to promote various campaigns during World War I. The following year, after the war ended, the CPI and its Bureau of Cartoons were abolished, but over the next hundred years the federal government has continued to use cartoons and comics to add visual interest, drama, and fun to the presentation of various types of government information; and to simplify complex concepts for a public diverse in age, learning styles, educational levels, and cultural backgrounds. 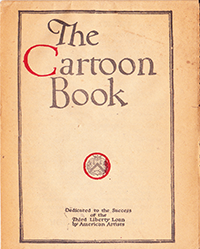 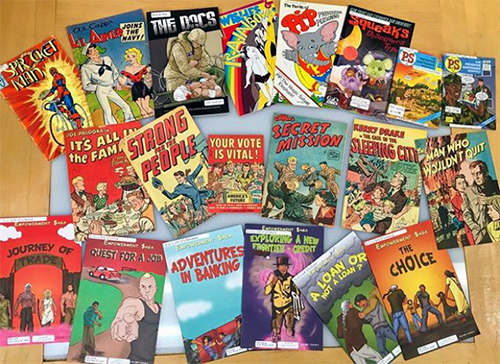 A variety of cartoon formats and genres have been used to illustrate government publications over the decades, ranging from simple illustrations, single-panel or single-page cartoons, or comic strips, to more elaborate storyboards, comic books, fotonovelas, and in more recent years even some edgy, adult-oriented, high-quality graphic novels.

Government comics are available on virtually every topic under the sun. Some of the most popular include military and civil defense; civic engagement and the workings of the government; environmental issues; employment and social security; health and safety; and consumer awareness.

Many government comics are directed toward specific audiences, and in some cases the audience will determine the nature of the nature of the presentation. For instance, in order to raise awareness about scams being reported among the Latino community, the Federal Trade Commission developed a series of informational pamphlets in Spanish and English presented in the format of the fotonovela, a genre popular among Spanish-speaking audiences. The fotonovela format has also been used to present information and advice on health issues of concern to Spanish-speaking immigrants. Some other specialized audiences for government comics include military personnel, parents, Native Americans, and, of course, children and teenagers. 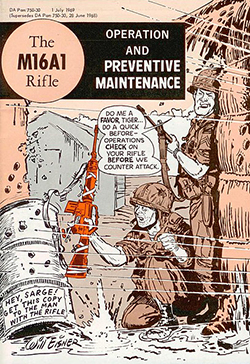 Some of the most famous artists and writers have produced cartoons for government publications, in some cases before becoming a household name. Famous cartoonists who produced government comics while serving in the Armed Forces include George Baker, Will Eisner, Dr. Seuss, Robert Chesley Osborn, Al Hirschfeld, and many others. Milton Caniff was found unfit for military service, but still contributed cartoons and illustrations to the war effort. Kurt Schaffenberger served in the U.S. Army during World War II and worked as a translator for the Office of Special Services, but it was later, in the 1960s, when he created The “Hidden Crew” for the U.S. Air Force.

Commercially-successful cartoonists who created works for other departments include Charles Schultz, Al Capp, Charles Biro, and Morrie Turner. In some cases, an already commercially published (and copyrighted) cartoon, such as Scott Adams’ Dilbert, will be incorporated into a new government document.

Other government cartoons have been produced anonymously, sometimes by professional agencies; sometimes by amateur cartoonists who have more enthusiasm than skill (see for example, the Freddie Food Stamp cartoon below, or the even more primitive Fantastic Tidal Datums). 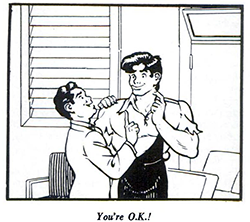 Charlie Brown, Pogo, Lil’ Abner, Rex Morgan, M.D., Captain America (and the Campbell Kids!), Mark Trail, Dilbert, and many other characters already familiar to the public from the newsstands and daily newspapers have made special appearances in government comics. 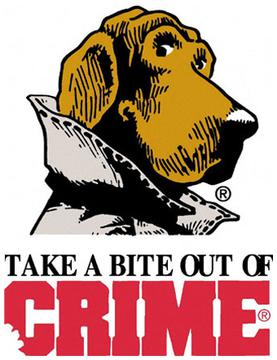 In other cases unique characters such as Smokey Bear, McGruff the Crime Dog, and Connie Rodd have been created as official mascots to promote specific agencies or agendas.

Many stories in government comics are one-offs, in which a unique character appears only once to explain a specific idea and then is never heard from again. A few of these government characters whose careers never quite took off are Komrad Ivan; El Gato, the Cat; Pip, the Magic Safety Elephant; Sprocket Man; the Garbage Gremlin, Bert the Turtle; and Freddy Food Stamp.

Occasionally there have been controversies over using comics to impart government information. These are a few of the objections that have been raised to various government comics over the years: In addition to government comics, there are many government documents that are not comics themselves, but comment on various aspects of comics and the comics industry. For example, U.S. Copyright Office Circular 44 provides copyright guidance for cartoonists seeking to protect their intellectual property. In April and June of 1954, the U.S. Congress held a series of hearings to investigate a possible correlation between crime, horror, and superhero comic books and the current epidemic of juvenile delinquency. One of the key witnesses at the hearings was Dr. Fredric Wertham, a psychiatrist who treated juvenile delinquents. He had noticed that many of his young patients read comic books and drew the conclusion that reading comics led to criminal behavior, a thesis that was explored in his 1954 book Seduction of the Innocent.

The conclusions and recommendations of the investigating committee were published later in an interim report, but even before this report was released, in order to sidestep the threat of government regulation, members of the comics industry decided to self-regulate by forming the Comics Magazine Association of America (CMAA). In October of 1954 they adopted the Comics Code Authority, which imposed a code of ethics and standards for comics. Comics that adhered to the code received a seal of approval from the CMAA. Over the years, as comic books competed with television and catered to a more adult audience, publishers chafed at the quaint restrictions of the Comics Code, which seemed a relic of a bygone era. Even though the rules were relaxed in 1971, and again in 1989, they were increasingly ignored by artists and publishers until finally, in 2011, the Comics Code Authority and their code quietly expired. Several court cases over the years have involved comics. One of the earliest was Detective Comics, Inc. v. Bruns Publications, Inc., 111 F. 2d 432 (2d Cir. 1940), in which a judge found that the “attributes and antics” of a character called Wonder Man were sufficiently similar to those of Superman to constitute a copyright infringement. The transcripts of testimony in this case have been digitized and posted on Ken Quattro’s The Comics Detective blog.

If you don’t want the copyright to your cartoons or comic strips to be infringed, be sure to read U.S. Copyright Office Circular 44, which provides copyright guidance for cartoonists seeking to protect their intellectual property.

In the late 1980s the Chicago Tribune published a series of Dick Tracy comic strips that told a fictional story involving payola, murder, and a shady concert promotion company called Flipside, Inc. An actual company named Flip Side, Inc. sued the authors and the publisher (unsuccessfully) for libel, invasion of privacy, and emotional distress in the case of Flip Side, Inc. v. Chicago Tribune Co., 206 Ill. App. 3d 641 (1990).

In addition to these works, there are also several government publications that are more tangentially related to comics, such as handbooks on printing, drawing, graphic design, and layout.

These books and Web sites can provide further insight into the world of government comics: