Hi, Yank! was the second of the "Blueprint Specials" to be published, and according to contemporary accounts the most well-received.

It was inspired by Yank: The Army Weekly—a magazine published by the U.S. military and distributed to members of the armed forces during World War II. Each episode of this revue is titled after a section of the magazine, and most of the scenes feature cartoonist George Baker's Sad Sack character, who debuted in the first issue of Yank. 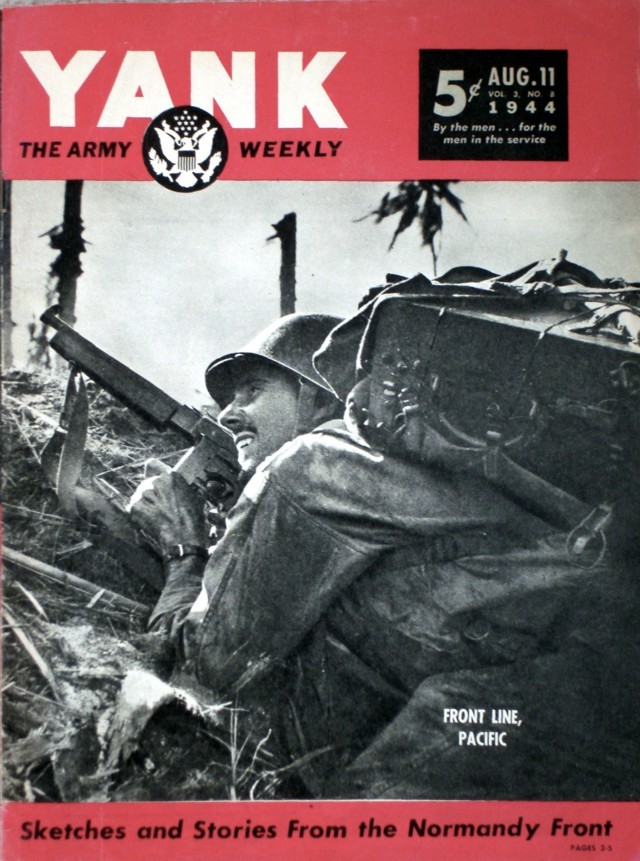 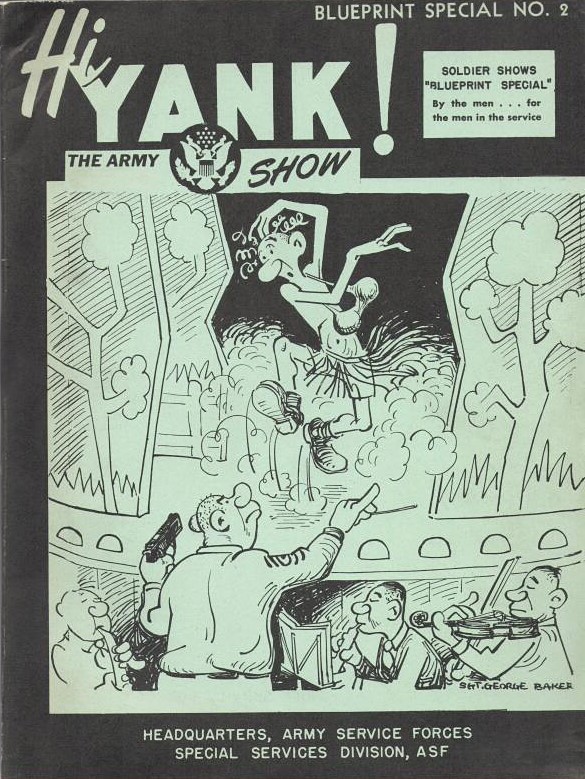 Unlike About Face!, the previous Blueprint Special, which had input from civilians, Hi, Yank! was a true soldier show—conceived, written, composed, acted, and produced entirely by Army service members, although most of the show's creators and performers had previous professional experience in show business.

The test performance of Hi, Yank! took place at Fort Dix, New Jersey on Monday, August 7, 1944. It was produced by Broadway press agent Captain Hy Gardner; Corporal David E. Fitzgibbon directed and did some dance routining in the opening and Sports Section numbers. The cast included ex-vaudeville performer Bobby Faye as Sad Sack, and the Principal Dancer was Sgt. Bobby Evans, former star of New York's Cotton Club and Charlie Foy's Hollywood. Evans' original act entitled "Fifty-Second Street" was incorporated into Hi, Yank! Baritone James Boxwill and tenor Samuel Alessi were also featured in the cast. Sets and costumes were designed by Lt. Robert Stevenson, who had worked as a stage designer for the Capitol Theatre in New York.

The score was recorded under the direction of Andre Kostelanetz and sent to troops to promote the show and familiarize them with the material in consideration of putting together a local production. Bob Hope provided an introduction.

The "Blueprint Special" episode of the PBS television show History Detectives depicts the mystery and curiosity surrounding the discovery of a promotional disc that featured a spoken introduction by the show's director and a performance of the song "The Most Important Job" from the show's finale.

These instructions are in the score:

The music has been assembled so that each instrument has a complete routine of the show in proper sequence.

The orchestrations have been voiced so that they will sound well with a minimum of one trumpet, three saxophones, piano and drums. If more of the instruments which have been scored are available, they of course should be used. Additional instruments, up to and including a full band, may be used. The pianist's and conductor's parts have been thoroughly cued. If necessary, theand entire show can be played by piano alone.

Cover and Other Drawings

SAD SACK dreams about being the star of the basketball game in this farcical dream-ballet featuring men in tutus.

A pilot pines for his hometown honey but feels she is with him every moment. This simple scene follows the same format that had been used in About Face! for "First Class Private Mary Brown": the entire song is performed as a male solo in front of the curtain, then the orchestra plays while the soldier dances with his girlfriend, then the singer reprises the last part of the song.

IRIS, a new WAC recruit, is complaining that the uniform issued to her is a man's uniform and is way too big for her. The SERGEANT is not very sympathetic, and when he stands up we see why—he is wearing the WAC uniform, complete with skirt, that he was issued. This sketch has its origins in a skit written by a student in the school for Special Services in Lexington Virginia, where it had the title "WACs Fifth Avenue." The title was changed so that each scene could correspond to a section of Yank magazine, but the sketch would be reused later with its original title in P.F.C. Mary Brown.

Four men complain that the skills sets they brought with them when they enlisted have absolutely nothing to do with the jobs they have been assigned.

Scene 9. Strictly GI
This scene is conducted entirely in acronyms and initialisms—some military, such as PX, K.P., and AWOL, and some more popular (and sometimes off-color), such as O.K., QT,, P.U., and S.O.B. This skit by Arnold Auerbach was written while he was going to school for Special Services in Lexington, Virginia.

JOE receives a postcard in the mail from "you can imagine whom," but he is more interested in the picture on front than in the righting on back. He sings nostalgically about how it is a picture of his hometown on which his room has been marked with an "X."

Scene 11. What's Your Problem?
Song: "Stuffo Powder Feels So Clean" (sung to the tune of the Pepsi-Cola jingle)

SGT. AGONY conducts a call-in advice show on the radio. SAD SACK calls in with a very bizarre and zany problem. At one point the show is interrupted by a commercial jingle about a foot powder. The music for this song is not included in the score, but there would have been no need, since this earworm was the first radio jingle ever written and was very well-known at the time.

This colorful, lavish production number features detailed choreography by Pvt. José Limón, a Mexican immigrant who had already made numerous appearances as a dancer on Broadway. After the war he became an American citizen and founded his own dance company, where he developed and taught his distinctive approach to dancing known as the Limón technique.

The Special Services division was one of the few Army units to be integrated at this time. At the tryout performance of Hi, Yank!, this number featured Black dancers Bobby Evans and Suzie Brown dancing the rumba. Evans was billed as Principal Dancer, and his original act "Fifty-second Street" was incorporated into the show, although it was not included in the published script.

Ten years in the future, JOE and MIKE have mundane civilian jobs after the war, and they discover that SAD SACK has become fantastically rich and powerful and is now their tyrannical boss, all too ready to take revenge for the way they treated him in the Army. They attempt to get out of this nightmare by re-enlisting in the Army, only to learn that SAD SACK has just been made Chief of Staff.

SAD SACK returns to the Army smoking a cigar and wearing a ludicrous uniform with flashing stars on its giant epaulettes. A serious, by-the-book MP is unfazed by SAD SACK's eccentric appearance and defiant behavior and proudly declares his job in the Army to be "the most important job I ever had." The entire cast joins in, reprising two other numbers to bring the show to a rousing conclusion.

"The Saga of the Sack"

This song may be related to a song called “My Gal’s Working at Lockheed,” written in 1944 by composer Matt Dennis and lyricist Frank Loesser. It does not appear in the published materials of this show but may have been written for it or used in it at some time, and some sources mention it as a song in the show. Like "My Gal and I," it is sung by a pilot thinking about his civilian girlfriend, but it goes farther and makes the girlfriend an employee of Lockheed and the singer imagines her working on the plane he flies into combat.

This song is a parody putting new lyrics (about a fictional foot powder) to the music of the jingle "Pepsi-Cola Hits the Spot," which was the first commercial jingle ever written for the radio and was very well-known at the time. The music is not included in the score to this show.

The finale features one new number, "The Most Important Job," followed by an instrumental reprise of a few bars from "Report from the Caribbean," then a reprise of "Little Red Rooftops," sung first as a solo, then by the entire cast.