A guide to mapping resources, including GIS (geographic information systems), at the UNT Libraries and on the Internet. The guide also provides links to geospatial and other data that can be downloaded and mapped.

Vector Data = Geographic data composed of points, lines or polygons. It defines the features of a geographic area using attributes (e.g., cities, rivers) - there is not limit to the number of attributes that you can assign. Attributes can be text or numeric. Usually saved in shapefile or geodatabase format.

Raster Data = Geographic data that is recorded in pixel (grid) form. It is good for showing continuous data over a geographic area (e.g., elevation, rainfall) or for performing weighted calculations. Usually saved in an image format. Aerial imagery you see in a map is in raster format.

The following image is a quick example of what a point, line or polygon might look like in vector or raster format: 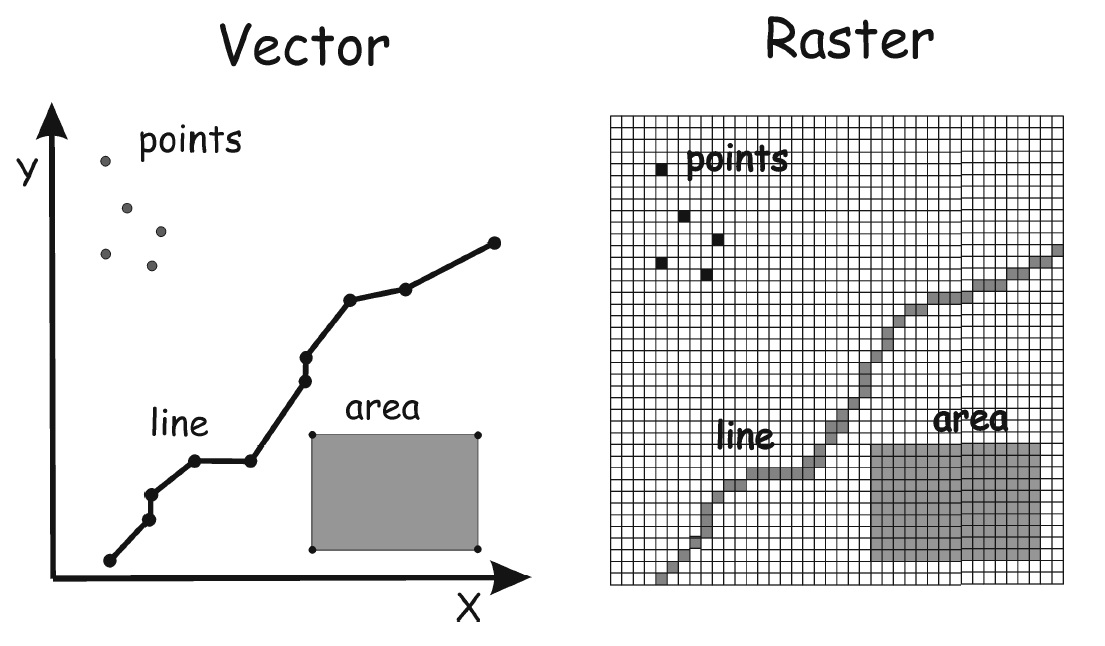 LiDAR = stands for Light Detection and Ranging - millions of light pulses over a given area return to the sensor with location/elevation information, which enables you to create an accurate 3D surface.

GPS = A constellation of satellites in orbit around the earth communicate with devices that triangulate your position/elevation to create accurate data of what your are studying. Outputs are technically in vector format and can be easily brought into GIS for subsequent analysis or display. 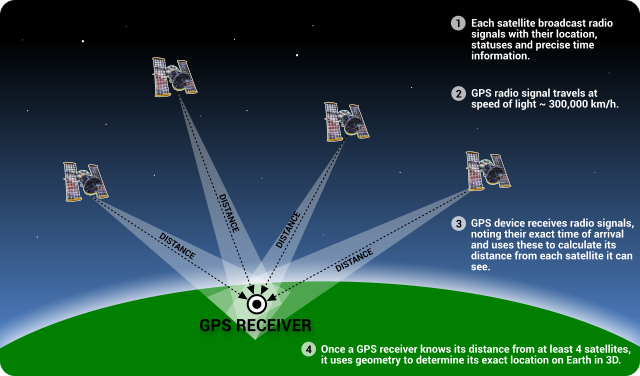 Shapefile = the default vector GIS file type. It is composed of multiple "supporting" files with extensions including, but not limited to: *.shp, *.shx, *.dbf and *.prj. Shapefiles are also highly interoperable, which means that other, non-ArcGIS software, such as QGIS, can create, read and edit shapefiles. When zipped, shapefiles are highly portable.

Geodatabase (GDB) = can be either a Personal GDB or File GDB; in ArcGIS for Server, you might also hear about an SDE GDB. GDBs are becoming more popular within the ArcGIS environment. GDBs store geometry, a spatial reference system, attributes and behavioral rules for data. GDBs have Feature Datasets and Feature Classes. A Feature Dataset is like a folder and a feature class is like a shapefile. Interoperability is not as good with GDBs; for example, QGIS cannot read a feature class without it first being exported to shapefile format. GDBs can be stored in multiple formats, including: Oracle, Microsoft Access, PostgreSQL or Microsoft SQL Server, for example.

Coverage = the predecessor to the shapefile with a *.e00 file extension. Coverages have effectively been phased out, but you might come across one in an older dataset. They can be converted to shapefile using a tool in ArcGIS.

Keyhole Markup Language = commonly referred to as KML or KMZ, this is a file format commonly found when using data in GoogleEarth. Can be converted to shapefile format or vice versa; however, you may lose attribute information in the conversion.

TIFF or GeoTIFF = a common multispectral aerial image format that ends in *.tiff.

LAS = the predominant file format for LiDAR that ends in *.las - occasionally, you might run across another format ending in *.xyz. These formats can be converted to shapefile or feature class format. A warning though: they might be converted to multipoint features - a compressed version of a shapefile or feature class - which prevents you from seeing each individual point's attributes. Extra steps are necessary to extract the more detailed information.

CAD = stands for computer-aided design. AutoCAD and Microstation are two common programs that create CAD drawings. Common file types are *.dwg, *.dxf and *.dgn. Even though CAD software is different from GIS software, it is possible to bring CAD drawings into GIS into their real-world locations. Some finagling, especially with surface adjustment factors, may be required, however.

XLS or CSV = Excel and CSV files, with an appropriate join field, can be appended to GIS data - either shapefile or feature class - to augment tabular data. Adding Census variables to a tract layer or joining detailed descriptive information to a soils layer are good examples of when an XLS or CSV file might be useful.

A dataset doesn't have to be in a geospatial file for you to map the data to geographic locations. A social science or humanities dataset can be linked to a geospatial file and mapped as long as it meets two criteria:

You don't need to use a pre-existing dataset either. You can start from scratch or join your spreadsheet data with your spatial data. This article from ESRI offers information on joining tables. This website provides tutorials on mapping Census Data.

If you do decide to start from scratch, it may be worth consulting a resource such as Data Design for Mere Mortals to design your data to be as efficient and clean as possible. Check out LinkedIn Learning for training and tutorials on how to use, clean or manipulate different datasets. As a member of the UNT community, you get free access to LinkedIn Learning!